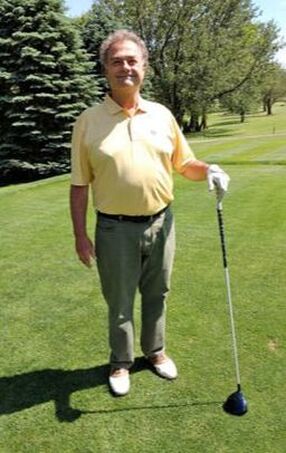 Dick Pyle underwent a total knee replacement for both knees, only six weeks apart! The problem with his left knee began about 30 years ago. Dick explains that he jogged a lot back then and had to stop jogging because of the pain. After he would play golf, he found himself taking Advil regularly to help with the pain. Even home maintenance projects around the house became increasingly difficult. “I could only stand 20 minutes at a time, I became very inactive,” states Dick. He saw a few doctors over the course of this time and even received gel shots, but when those wore off he knew it was only temporary relief and that it was time to schedule a surgery.
​
Dick researched surgeons to perform his surgery and then he got a call from Hostcare Resources about the Medical Travel benefit. He says one of his first thoughts was... “this is the way insurance is supposed to be.” Dick says he never really had any doubts and his only concern was being able to evaluate the Hostcare recommended surgeon in a 20-minute doctor visit. Dick says researching this new surgeon and asking a lot of questions really helped, as well as the time and care Hostcare gave. According to Dick, “the process in place was remarkable – all the people involved in the surgery came and talked with us, it was thorough.” He also says the doctors were honest and realistic with what to expect.

It has now been six months since his second surgery and he has no pain, does almost anything he wants and is even golfing again! Dick says he has already shared this experience with other people. “If people are worried about something going wrong, they are worrying about the wrong things.” He says Hostcare made him feel comfortable and supported, they were honest and proactive, and followed up. Dick sincerely states, “I knew things would be taken care of. Hostcare did an extremely good job thinking things through. They are doing it for the right reasons.”